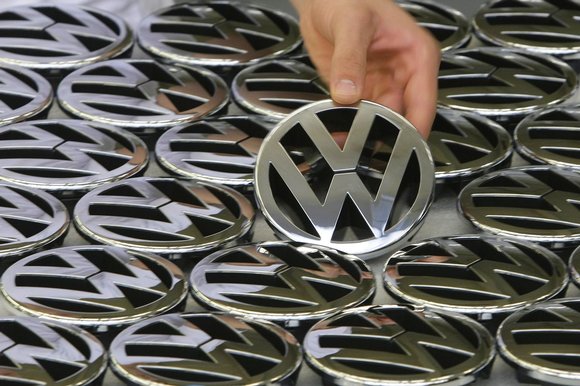 THE European Central Bank has dealt Volkswagen a fresh blow by refusing to buy the loans that finance sales of its cars.

The veto, confirmed yesterday by an ECB insider, raises the prospect of the manufacturer being unable to borrow to fund sale and lease deals on new cars.

VW is already reeling from the emissions testing scandal that is expected to cost it at least €6.5bn (£4.8bn) and has led to the departure of chief executive Martin Winterkorn.

Like most car makers, VW has a financial services arm that acts as a quasi bank, helping customers to buy and lease new cars. On Friday the ECB put a temporary ban on buying VW’s asset-backed securities — debt backed by car loans — excluding the company from its €60bn-a-month quantitative easing bond-buying programme. The ECB declined to comment, but market sources said other buyers were expected to follow suit.

The buyer’s strike will increase VW’s borrowing costs at a time when it faces billions of pounds of fines, lawsuits and recall costs. The three main credit rating agencies have warned they may slash its ranking.

The company is in throes of the worst crisis in its 78-year history after confessing that it rigged diesel cars sold in America to fool testers into believing they produce far less pollution than they do. After initially denying any problem, it admitted some cars sold in America had been fitted with “defeat devices” — software designed to cut toxic emissions during tests.

The scandal has spread to Europe, and so far up to 11m vehicles are believed to be affected. On Friday VW shook up its board, promoting Matthias Müller, head of the Porsche division, to chief executive.

VW’s finance arm has swollen in size over the past five years and now handles almost one in three of new vehicle sales. In June it had €164bn of assets and 13.5m customers.

The crisis intensified on Friday when Switzerland banned the sale of VW diesels that could contain the cheat software — a move that could threaten 180,000 cars. A list of affected cars in this country is expected to be published this week.

Car sales across Europe have been turbocharged by cheap finance deals offered by manufacturers and fuelled by ultra-low interest rates. Britain’s car market has been one of the biggest beneficiaries, with almost 80% of private sales of new vehicles funded by finance deals, according to the Finance & Leasing Association. Most are provided by the finance arms of car makers, with the rest from independents.

Last year VW’s British arm issued £1.2bn of asset-backed debt in one go, which it said was the biggest-ever sterling deal of its type.

Market sources said the ECB, which is one of the largest buyers of debt in Europe, will maintain its ban until there is more clarity on VW’s future. The manufacturer is the single largest seller of corporate bonds in Europe. The ECB block will raise fears about VW’s future. The bank has been sucking up European government and company debt since March when it launched its QE programme.

VW has been warned by all three rating agencies that its debt rating could be downgraded. Fitch warned that the rising cost of insuring the car maker against default implied the debt had moved into junk territory. If Volkswagen’s rating were cut to junk it would force a number of investors to sell their bonds, piling more pressure on the company.

VW has €67bn of debt outstanding and must pay back €20bn to investors by the end of next year. Last week senior bondholders lost €2bn in just one week from their investments in the business, and the share price plummeted 30% — wiping £22bn off VW’s value.

“Almost every investor in Europe has lost money in the past week because VW is such a big issuer of debt. That is enough to scare a lot of people,” said a London banker who specialises in debt sales.

Other companies are running scared and refusing to risk selling bonds in the coming days.

“Companies have been spooked by recent market moves,” said Jeff Tannenbaum, head of bond sales at Bank of America Merrill Lynch, referring to the impact of the Volkswagen scandal. “They are trying to understand what it means in terms of their debt plans.”